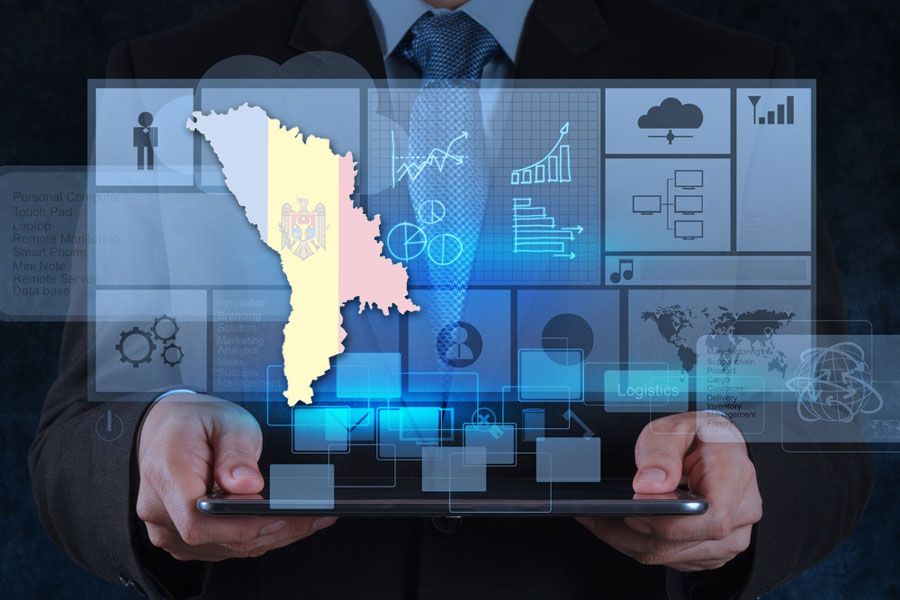 In recent years, the ICT sector in Moldova has made remarkable progress. Smart technologies have increasingly entered the business environment and everyday life and private companies have been on the rise. The results have exceeded the forecasted 2018-2023 strategy for the development of the information technology industry and ecosystem for digital innovation. In one single year, the sector’s turnover increased to $380 million, which represents 70% of the 5-year estimate. There were considerable changes in terms of attracting human capital with the total number of IT professionals increasing by about 38%. This number is 13% higher than the total forecasted for the next 5 years.

The upward trend is also confirmed by the indicators/statistics of the National Bureau of Statistics (NBS), which shows that from 2015-2019 the IT industry tripled its sales revenue and along with the telecommunications sector accounted for 7.1% of the GDP. The success of the IT sector can be quantified in the number of jobs created, accounting for over 29,000 people who work in the field with the highest salaries on the market.

Representative figures for the ICT sector, 2019:

IT products and services – exported to over 30 countries

NBS data shows that in the period referenced, the IT industry recorded revenue of about 6.8 billion lei ($395.135 M), while the volume of exports of products and services exceeded the figure of 5 billion lei ($290.540 M). There are 2,300 companies on the Moldovan market that export their IT products and services to over 30 countries around the world. Moldova is considered an attractive destination from a technological point of view, both for small companies and for those with major investment potential. Thus, in 2019 the number of ICT companies in Moldova increased by about 35%. The domestic IT market also offers favorable conditions for attracting foreign investors and is taking important steps to join the first-tier states of regional attractiveness. Among the competitive advantages of Moldova are the elimination of administrative barriers for foreign IT professionals, tax facilities for employees in the sector, a single tax of 7% of sales volume, and the creation and launch of physical infrastructure of IT parks. Over 600 companies from 136 countries operate in the IT Park, with 45% of these businesses registering within the past year. Private companies employ over 10,000 people with an average salary of about 29,000 lei per month under the conditions of the IT Park tax regime. The total turnover of resident companies according to IT Park statistics is 3.7 billion MDL ($215 M). The country’s capital remains the favorite destination of companies in the field. This year, Chisinau was named the city of the year in Southeast Europe for supporting and developing the IT sector. The capital won the “Emerging City of the year in SEE” award, ahead of cities such as Tbilisi and Sofia in one of the most important events in the field, “CEE Business Services Summit and Awards 2020”, held in Warsaw, Poland.

International support for the development of the ICT sector

The increase of competitiveness and the progressive development of the sector in recent years has also taken place with the constant support of external financiers. Due to the development potential of the sector, the development partners provided constant technical and financial assistance by supporting the private sector and entrepreneurship by creating IT parks and attracting investors. Among the top supporters of IT development in Moldova is the United States Agency for International Development (USAID), the first donor to recognize the potential of the Moldovan IT industry and provide assistance since 2005. Since then, Moldova’s exports of IT services and products have increased 40 times. Sweden is also in the top 5 external donors for the Republic of Moldova with the IT sector being one of the areas it supports. In recent years USAID and Sweden have invested about $ 8.9 million in the Tekwill Project, implemented by the National Association of ICT Companies (ATIC). Tekwill and ATIC have also attracted private and public investments of over $4 million to contribute to the development of the IT sector in Moldova. About 66,000 people have benefited from the educational and entrepreneurship programs of the TEKWILL Project, and 218,500 people became beneficiaries of the projects carried out in partnership with other entities. “Tekwill” was created in 2017 as a Center of Excellence of the ICT sector in Moldova, with the main purpose of aligning the field with current market requirements. Aiming to contribute to increasing the competitiveness of the IT industry and other strategic sectors of the economy, the center has expanded its fields of activity becoming a complex nationwide project, with the slogan “The revolution begins!” in 2019. The basic objective of the Tekwill Project, as a platform dedicated to the progress of the IT sector, is to ensure a major impact on the economic development of the country by improving the entrepreneurial and educational capacities of society, in addition to increasing the research and development potential of educational institutions in line with the demand in the IT market.